Get More From Your Burgers

For QSR operators, craveable burgers are a critical success factor. For full-service operators, bodacious burgers are even more important in maintaining a winning brand identity.

According to a new report on burgers by Technomic, the secret to burger success is innovation, with 35% of consumers saying that it is very important that operators offer burgers with new and unique flavors.

The sale of burgers on American menus has dipped, with only 56% of consumers saying that they have consumed a burger in the past week, compared to 75% four years ago. Higher prices and a focus on items that are perceived to be healthier are part of the problem. Red Gold takes a deeper dive into the Technomic report to share insights that can boost your burger sales.

For top QSR chains, burgers remain a leading menu item, but there has been a decline in the number of burger offerings on the average menu. Chicken entrees are now equal to burgers on a typical menu because chicken offers higher margins.

It is clear that building a better burger loaded with premium ingredients is a key strategy. The top of that list includes smoked bacon, signature sauces, and flavorful cheeses such as pepper jack. A survey of consumer attitudes of recent burger menu additions scored Applebee’s Triple Bacon Burger highest in craveability. The burger features a beef patty seared in bacon, then topped with three slices of bacon, cheddar cheese, and barbecue bacon ranch dressing. 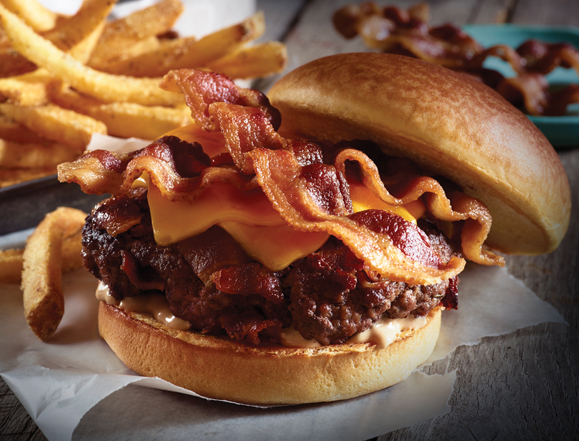 One of the leading signature sauces on the rise is sriracha ketchup. Datassential reports a 1,600% increase in the menuing of sriracha in the past four years. Chain restaurant examples include Max & Erma’s (Black Pepper Bacon Sriracha Burger) and Ram Restaurant & Brewery (Bacon Me Crazy Burger featuring Canadian bacon, smoked gouda, fried egg, and sriracha ketchup on a brioche bun).

Datassentials reports a 1600% increase in the menuing of sriracha, like Ram Restaurants & Brewery’s Bacon Me Crazy burger that includes sriracha ketchup

Other growth ingredients called out on burger menus according to Datassential are red onions (up 37%), ketchup (up 35%), caramelized onions (up 34%), pickles (up 25%), and avocado (up 22%). Rising condiments include aiolis, such as those made with sriracha and chipotle mixed with mayo. Look to white cheddar and Gorgonzola cheeses plus brioche and sesame seed buns for innovation.

Sliders on kids’ menus is the number one growth item, according to Datassential. Up 17% in the past four years, burger sliders beat mac & cheese and grilled chicken as the top kids’ menu items for growth.

Burgers are still a staple on American menus, and the winners in the burger war are always those with imagination and a creative approach to how they market them to their customers.