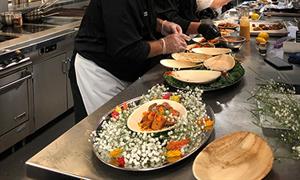 ELWOOD, Ind. (August 12, 2020) – Red Gold was proud to be a part of the Hoosier hospitality of welcoming World Food Championships Final Table: Indy and its competitors. This year’s Final Table took place just outside Tomato Country in Indianapolis, IN. The competition was held at Ivy Tech’s Indianapolis campus on August 8th and 9th. Red Gold Tomatoes was present in more ways than one. The first round challenged competitors to create a protein dish that featured the Indiana-native tomatoes, as well as Red Gold Fourth Generation Owner, Colt Reichart, was in attendance at the competition as a valued judge.

In October of 2019, Dallas, Texas hosted the largest event in food sport, the World Food Championships, where more than 450 home cooks and chefs from 43 states and 14 countries came to compete. Of the competing teams, 10 culinary experts walked away champions of their category with a $10,000 cash prize and entry into the finale competition. Red Gold was a proud sponsor of the Bacon Category Competition, where Bacon Babe, Jodi Taffle, walked away victorious and towards her next culinary moment, World Food Championships Final Table: Indy.

Nine months later, ten talented home cooks and studied chefs come to compete in Indianapolis, IN for the title of World Food Champion. To win, they had to create three complex, Indiana-inspired dishes in just two days. Saturday, August 8th, kicked off the intense 2-day competition. In round one competitors were tasked with creating a pork dish that featured Red Gold Tomatoes and National Pork Board pork. Of the 10 finalists, only five advanced in the competition, inching closer to becoming a kitchen icon. Sunday, August 9th, began round two. The five remaining competitors began constructing one-of-a-kind duck entrees featuring Maple Leaf Farms. The last three competitors standing competed in the third and final challenge, where they created the iconic Indiana dessert, sugar cream pie.

Judging this high-stakes food competition were 15 food experts. This esteemed panel of judges tag-teamed the competition, and included one of Red Gold’s very own, Colt Reichart. Colt took his place at the judging table on Saturday, August 8th where he examined the round one dish, Pork and Parisian Gnocchi. He and four other judges held the weight of all ten contestants and determined which five got the chance to compete in the second round.